“I’d go, stop, and accelerate back off it,” says the 24-year-old. “I could cut and keep going rather than sliding. I felt like I was on a high. It was so cool.”

Several years prior, the football player for Kentucky’s Georgetown College sustained a horrific on-field injury. He broke his leg, and the subsequent infections and complications led him to have his right leg amputated from the knee down.

Undeterred, Kasey aimed to play college football again, so once he fully recovered, he sliced the sole off a cleat and taped it to his blade-style prosthetic. The DIY approach allowed him to regain some of his explosive speed. He even returned to the field.

The uplifting story caught the attention of Sports Illustrated, which featured Kasey in an extensive 2017 profile. At this same time, Jefferson industrial design students Josiah Harris ’18 and Weston Rivell ’18—friends since their freshman year—had been tinkering with concepts that melded their interests (medical devices for Harris and sports for Rivell).

Their brainstorms and napkin doodles finally came into focus once they read about Kasey. He could play football in a limited capacity but still dealt with traction issues with his makeshift cleat.

“This shouldn’t be happening,” Harris says. “He’s a talented athlete. He shouldn’t be slipping out of his prosthetic. That was unacceptable, and it’s a perfect market for putting something in place.”

Adaptive athletes have attachment options for running on the road and track surfaces, but the students’ research revealed no such device exists to help grip the ground in turf sports, such as football, soccer, field hockey, and lacrosse.

“Seeing Kody is when it became a real project,” explains Rivell, now a grad student at the School of Visual Arts in New York. “This isn’t just an opportunity in our heads. There’s somebody out there who we can work with and design for.” 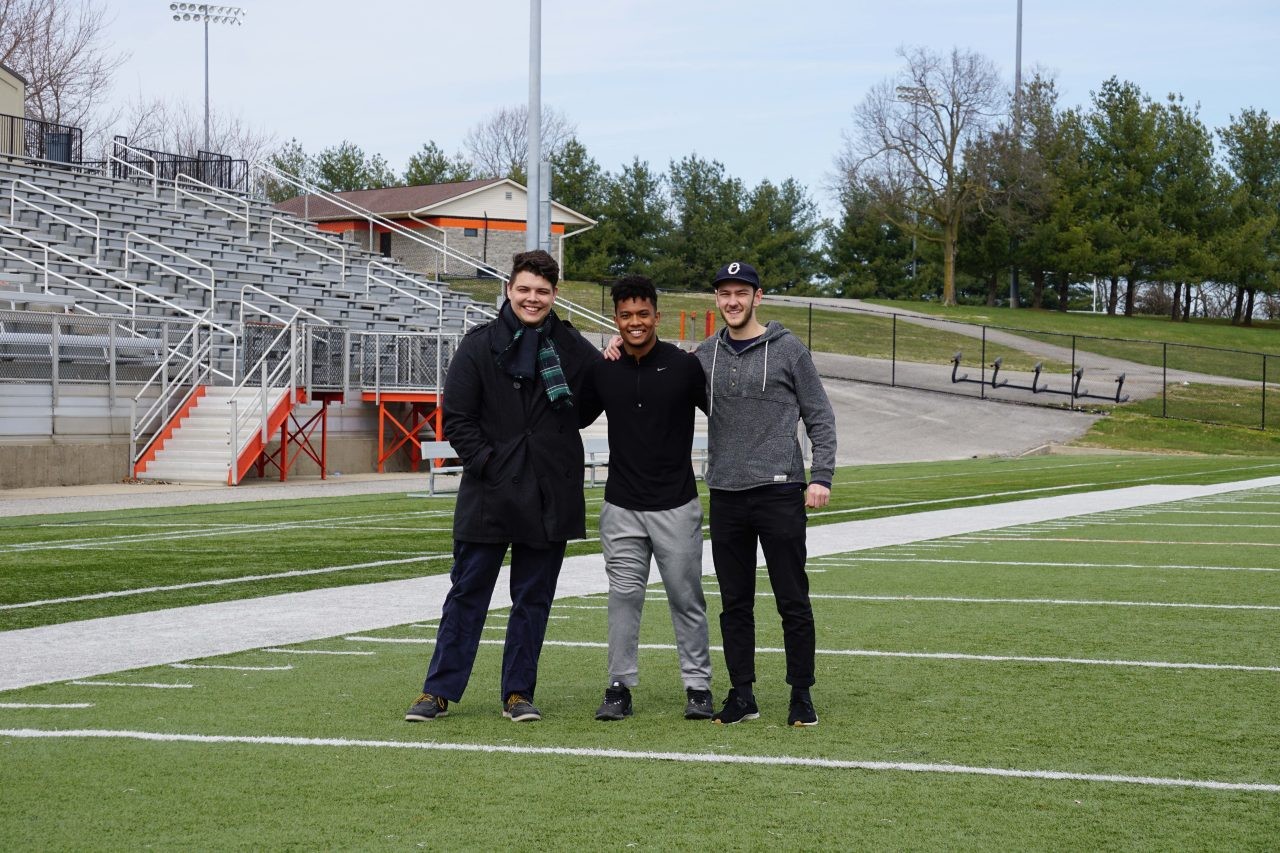 Armed with mountains of research and renderings, Rivell and Harris reached out to Kasey over Facebook to gauge his interest in testing their project.

Their prep work and concept immediately impressed Kasey, and he agreed to try out the prototypes made from EVA foam, polyurethane, and nylon. The students drove to Columbus, Ohio—where Kasey lived at the time—to watch their product in action for the first time. “I was so nervous,” Rivell admits.

The jitters quickly subsided when they saw Kasey sprint, stop, and cut in them, slipping significantly less compared to his old makeshift cleat.

To inform their work, the students took inspiration for crampons—used for ice climbing—and the back-and-forth movement of skateboard trucks. In addition, at Kasey’s request, they added spikes on the cleat’s side to help with hard cuts and improve his ability to plant the blade.

We tested a lot, and I couldn’t tell you how many prototypes I broke. I put a lot of force on them. I don’t think they realized how fast I would go on it.

“I was always honest with them and shared my experience of being an amputee,” he says. “We tested a lot, and I couldn’t tell you how many prototypes I broke. I put a lot of force on them. I don’t think they realized how fast I would go on it.”

The attachment pieces scattered across the Ohio grass didn’t deter the students; but rather, it served as a motivator to refine their concept and create a better product.

“We were ecstatic driving back to Philly,” Rivell says. “We couldn’t wait to make more.”

They met with Kasey two additional times for further testing—in Georgetown, Ky., and in Philadelphia right before Jefferson’s 2018 Celebration of Innovation, which Kasey attended. Meeting the University community and personally modeling the design at the event became one of the early highpoints of their growing relationship.

“It was amazing to showcase the artistic abilities that create these innovations,” Kasey says. “Josiah and Weston came to me with this idea, and it blew my mind. They’re good friends now and amazing people.”

Following of their senior capstone, Harris and Rivell continue to work toward bringing the newly named Apta Project (Latin for adapt) to market.

The alumni pitched the concept at the Reshape Competition in fall 2018 in Barcelona. They didn’t win the international wearable technology and product design contest; however, the pair made valuable connections at Adidas, which in turn, allowed them to access the company’s development lab for additional ideation.

Now with a provisional patent in hand (and full one planned), Harris and Rivell regularly talk to potential investors, as well as to suppliers and manufacturers on the best ways to cost-effectively produce Apta. They both attribute Jefferson with giving them the valuable design skills—and importantly, the real-world experience and business acumen—to pursue their dream. Ideally, they’d like to sell Apta themselves at the same price of an average shoe (no health insurance or prosthetist required). They also may explore a licensing deal with a company like Adidas.

Either way, getting the device out to those in need remains paramount, says Harris, who walks with a permanent limp following a serious basketball injury that shattered his tibia. The two plan to reach out to veterans’ groups, special children’s camps and other segments with a high adaptive population to spread the word.

“We want to improve the well-being of this community,” Harris says. “They’re in the prime of their lives, and they still want to do a lot and get back on the field.”

Harris and Rivell hope to have the first run of Apta out by fall 2020. Kasey says its release will be a “game changer” for adaptive athletes.

“It empowers people to continue to play and fulfill their dreams,” he says.

This article originally appeared on The Nexus.