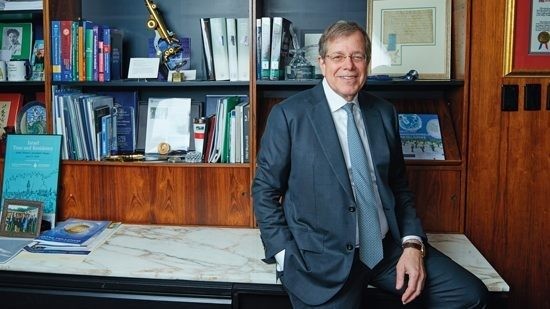 On May 13, 2021, Provost Mark Tykocinski, MD, shared the following comments at the 197th commencement ceremony for undergraduate students at The Mann Center for the Performing Arts in Philadelphia, Pennsylvania. His remarks appear here, adapted, in lieu of his usual column. A video of his address is available here.

Our unfamiliar world of the moment has unfolded in a most surreal way these past 15 months, and the post-pandemic path forward is at best hazy. As we emerge from this haze, we struggle to contextualize, and to chart a new reality individually and institutionally. Our unsettled feelings emanate from more than a pandemic. There’s also the backdrop of the technological whirlwind of our digital age and the concomitant societal upheaval and political fracture. Ahead lies a wondrous, digitally-powered frontier, yet one in which everything moves at zoom speed. Immediate results are the name of the game. A sense of never-ending urgency pervades.

What inner quality can we tap into in order to navigate the post-pandemic haze? Well, one that’s easily within your grasp: patience. That’s my simple message to you today, class of 2021. Learn to be patient, and armored with patience, be open to playing the long game.

As a scientist, my first illustration comes from science and the lesson that more often than not, important science takes time to unfold. Dr. Bernard Lown, my personal lifetime mentor, whom I met at Harvard 50 years ago, passed away this March, just months short of turning 100. Lown’s passionate advocacy for physician social responsibility earned him the 1985 Nobel Peace Prize for flagging nuclear proliferation as an existential threat to mankind.

However, there was another dimension to this extraordinary, multidimensional man, one that should have earned him a second Nobel Prize, this one for medicine. Together with Dr. Samuel Levine, Lown developed the cardiac defibrillator, a device designed to shock hearts back into rhythm when they go off the electrical rail. The defibrillator fundamentally transformed the world of cardiology, but its impact in the world of medicine didn’t end there. Viewed through an intellectual history lens, Lown’s mid-20th-century invention seeded a more fundamental meme: machines and organs conversing, a mechanical device restoring things gone haywire in the body. There are almost endless downstream possibilities. But they take time to unfold.

Here’s one. A few months ago, a team of Jefferson neuroscientists developed a technological marvel, a device that translates thoughts in the brain into mechanically actuated movements. The patient was a 43-year-old man who suffered a stroke, leaving his left arm limp. Our neurosurgeons implanted an electrode array into his brain that could detect his thoughts and translate them into action. All he had to do was think of moving his left arm and a computer process actuated an exoskeleton that moved his arm and fingers. Within three months, this patient was able to perform all kinds of thought-initiated, exoskeleton-powered tasks, such as picking up a pill bottle from one tabletop and delicately transferring it to another.

The evolution is obvious. Once a Lown-Levine duo establishes that a machine can talk to an organ, it’s only a matter of time before a Jefferson team flips the paradigm and finds a way to make an organ talk to a machine. This journey from machine-to-organ cardiac defibrillator to an organ-to-machine brain-computer interface took more than 60 years. This is scientific patience.

So, class of 2021, emerging from a pandemic, we must imagine and then realize our highest aspirations, even if this demands patience. Instant results often lead to impulsive, even destructive, action. Instead, learn patience, aspire to the heights, and then persevere. Play the long game.

Go forth and make Jefferson proud. Congratulations. Onwards and upwards.